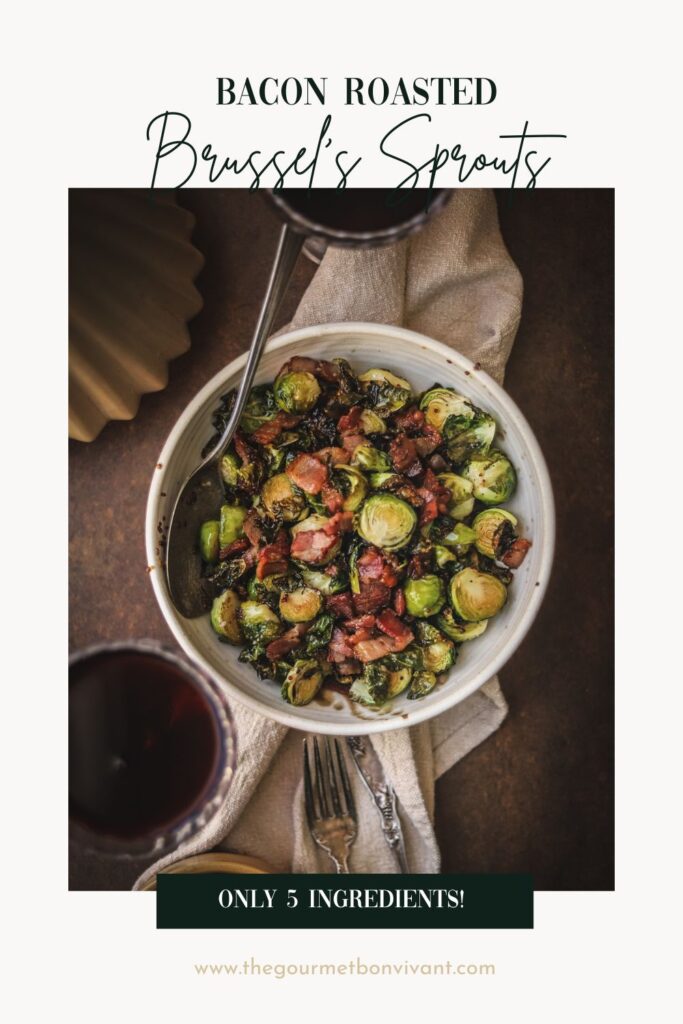 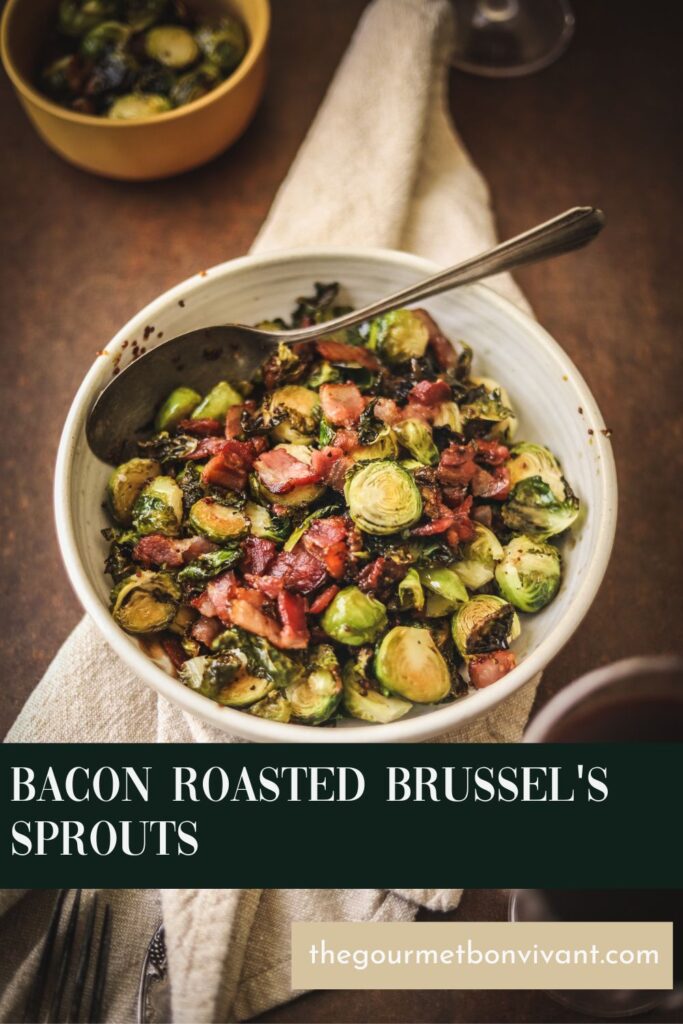 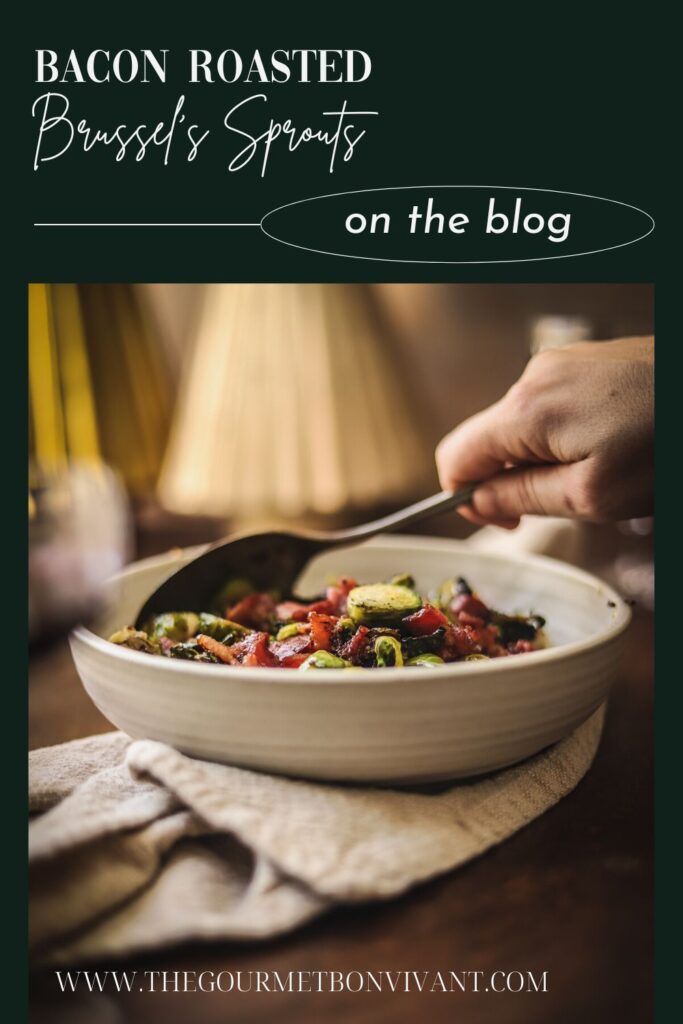 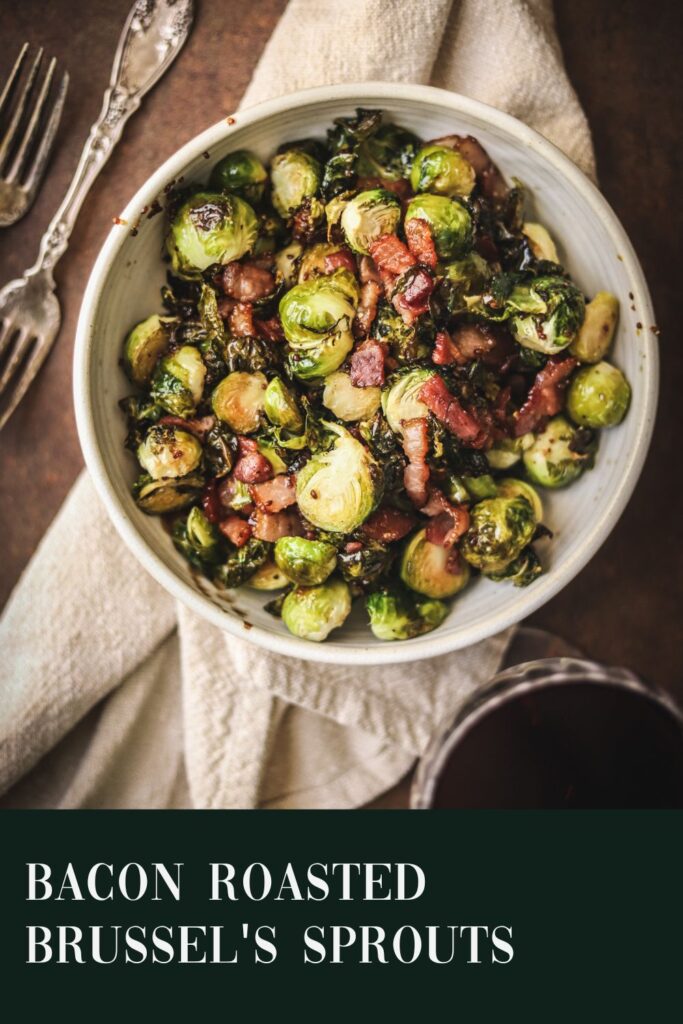 This five-ingredient Brussels sprouts with bacon recipe is going to become your new family-favorite side dish - especially for the holidays!

In fact, this recipe can be made even easier. I've included it with a maple mustard glaze you add almost at the end of the roasting process, but you don't have to use it. You can just go with the Brussels sprouts with bacon.

Brussel's sprouts with bacon is the ultimate side dish. Incredible quick and easy, yet it delivers big-time on flavor. It's perfect for the holiday table.

Can you roast Brussel's sprouts?

Yes, 100%. In fact, I would argue that this is the best way to eat Brussel's sprouts. Not only is it incredibly easy, but the roasting helps eliminate some of the bitter flavor that the sprouts have naturally.

How long do you roast Brussel's sprouts for?

It depends on the temperature of your oven and the size of the sprouts (they can vary widely). My general rule of thumb is 15-20 minutes at 400F.

Yes, they are very good for you. Brussel's sprouts contain tons of fiber. Even when you add bacon and salt like this recipe does, the pros outweigh the cons.

What temperature should you roast Brussel's sprouts at?

If you want the outer leaves to be crispy and slightly browned, you should roast them at at least 400F.

The Key to Crispy Brussels Sprouts

If you want your Brussel's sprouts to dry out and take on a crispy, browned caramelized layer, there's a few things you need to make sure of.

First, and this is probably the most important, DO NOT OVERCROWD YOUR PAN. This is such a common mistake with roasting any vegetable, and you'll ensure they steam in their own moisture, not roast. The sprouts should be in a single layer, and slightly spread out from each other (see the process photos below for reference.

If you have more than that, you need to get another sheet pan out.

Second, your oven has to be hot enough. I recommend roasting any vegetable, including Brussel's sprouts, at at LEAST 400 F, if not more. We're going for caramelized and not soggy here, so high heat is key.

Third, make sure you're adding fat. In this case it's straight up bacon fat. But you could totally make it without the bacon, just make sure you give them a good toss in olive oil, salt and pepper.

Follow these tips and you should be good to go!

There's only five ingredients in this recipe - and that includes the maple syrup glaze. If you want, you can omit this and it's literally just bacon, Brussel's sprouts, salt and pepper.

How to Make Roasted Brussels Sprouts with Bacon

Let's go through this step-by-step.

We're going to fry the bacon ahead of time, because we want to be able to control how much bacon fat we're going to add to the roasting pan. It's definitely possible to have too much and have the sprouts be greasy.

If you want to eliminate this step and roast everything at the same time, swap the bacon for pancetta. I've done this dozens of times, and it brings the salty, smoky flavor, but with a bit less fat. It's a great compromise!

You want to fry the bacon until it's just starting to turn brown. It will finish crisping up all the way when it hits the oven.

On a parchment lined baking sheet, spread your sprouts evenly in a single layer.

Next, using a slotted spoon, add the bacon over the sprouts. Add an additional tablespoon of bacon fat, and discard the rest. Toss to combine.

Roast the sprouts for 15 minutes (if you're not glazing the sprouts, roast for 20 minutes, and you're done).

Combine the maple syrup, olive oil, and mustard in a small bowl. Whisk until they're completely combined.

Step 4: Add the Glaze, and Finish the Roasting

Pull the sprouts out of the oven, add the glaze, a tiny bit of salt (the bacon provides most of it, so go easy), and pepper. Toss once more, and then roast for another 5 minutes.

What to Serve with Roasted Brussel's Sprouts

This dish is an amazing side at almost any table, but it goes particularly well during the fall and winter months when the sprouts are in season. This means that it's awesome for Thanksgiving and Christmas. I can't even remember the last holiday meal I had without this dish.

That being said, I would serve it alongside green bean casserole, maple roasted ham, or duck with fig and sage glaze, beet salad, and truffle mashed potatoes.

Other Awesome Sides to Try

Brussel's sprouts with bacon is the ultimate side dish. Incredible quick and easy, yet it delivers big-time on flavor. The bitterness of the sprouts is tempered by the fat in the bacon. Cook at high heat and add a simple maple glaze and you've got a to-die-for holiday side dish. If you're making this for a crowd, you're definitely going to want to double the recipe.
Print Recipe Pin Recipe
Prep Time 10 mins
Cook Time 20 mins
Course Dinner, Side Dish
Cuisine American
Servings 4 people
Calories 157 kcal

Make sure your Brussel's sprouts are in a single layer on your baking sheet. This will ensure they roast, rather than steam.  If you want to skip the frying the bacon step, swap the bacon for pancetta. It brings some of the same flavors, just a little less fat, so it won't be too greasy.