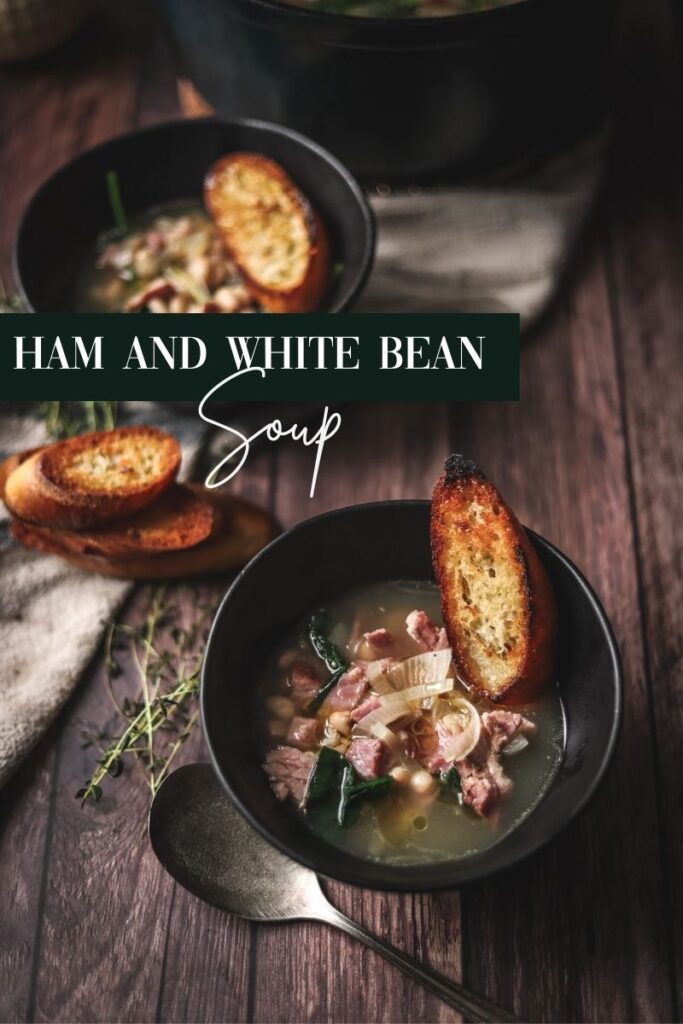 This white bean and ham soup is so flavorful and comforting, and yet somehow tastes light at the same time? Maybe it's the white beans and the kale that balance out the richness of the ham. Whatever the reason, I just know that I feel so nourished after I finish eating this soup.

For this recipe, I was feeling something easy, yet rustic and delicious. So we're using all the shortcuts here: leftover ham, canned cannellini beans, and store-bough chicken broth. Of course, if you want to make the chicken broth from scratch, that would only make this soup better! In this version, the whole thing comes together in less than half an hour.

This is one of these recipes that you can customize and make your own. For example, feel free to swap the out the kale for any green you'd prefer. Think: spinach, cabbage, or even celery. For the beans, you could totally use potatoes or gnocchi instead. Just make sure you pay attention to what you're using, and how those cooking times might differ from the original recipe.

How to Make the Soup

The process for making this soup really couldn't be easier. It all comes together in less than half an hour. However, the best way to make this is using leftover ham, so make sure you have some kicking around (I often freeze my leftovers and then whip them out when I want to make this).

First, we're going to heat up some olive oil in a Dutch oven or a large saucepan. Then, we add our aromatics, in this case, the shallot, garlic and thyme. I add the entire sprig of thyme. While it's cooking, the leaves fall off, and you can just remove the stems at the end. Same with the garlic cloves, I didn't bother chopping them. We'll just let them season everything and them fish them out later!

Sauté until the shallots are translucent. We don't want them to brown, but if they do a bit, that's ok.

Next, add the ham and the beans. Cook until heated through.

After this, you're going to add your chicken stock, and bring everything to a boil. Turn down the heat to a low simmer, and cover, cooking for 25 minutes.

After that, add the baby kale, parmesan, and season with salt and pepper.

And that's it! Garnish with some toasted crostini, and you're good to go. If you want to follow along with me, check out this video:

What to Serve with White Bean and Ham Soup

Listen, I'm a pretty big proponent of soup and salad or soup and a grilled cheese sandwich. So here's a few ideas of things that fit those to categories.

This soup can be stored in an airtight container in the fridge for up to four days (in fact, I think it tastes better the next day!). It can also be frozen for up to 6 months, just make sure it's got a tight lid and is level when you put it in the freezer. 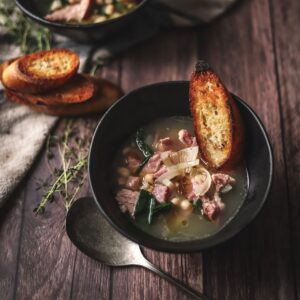 Cozy, comforting, rustic, and yet light at the same time. Eating a bowl of this soup will leave you feeling well cared for and nourished from the inside out. Bonus: it comes together in less than half and hour, and it's the perfect idea for your leftover Easter ham!
Print Recipe Pin Recipe
Prep Time 10 mins
Cook Time 20 mins
Course Appetizer, Brunch, Dinner, Lunch, Soup
Cuisine American
Servings 4 people
Calories 261 kcal

To make the crostini: thickly slice a baguette on the diagonal. Heat a non-stick pan over medium high heat. Add 2 tablespoon of olive oil. Add the crostini, and cook for 3-5 minutes, until golden. Flip, and repeat process on the other side.  Don't forget to pick out the thyme sprigs and the garlic cloves!