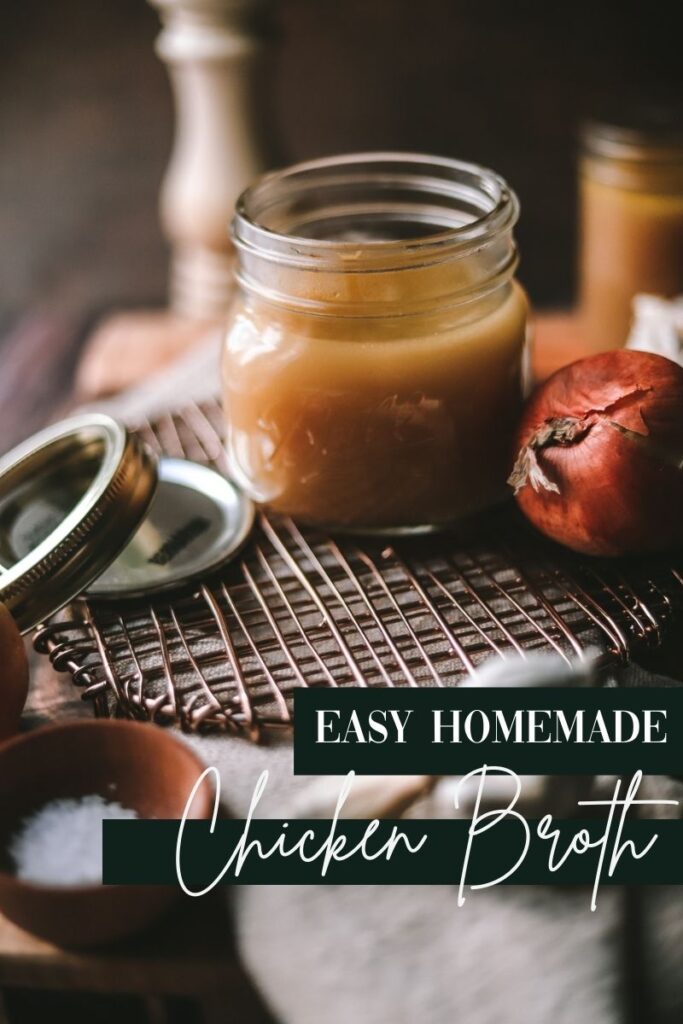 Learning how to make homemade chicken broth is one of those things that sounds hard until you do it once. I promise you it's really not, and the payoff is undoubtedly worth it. I have made countless (COUNTELESS) homemade chicken broth recipes in my life, and I've finally landed on this version as the absolute best. So let's get to it, and I'll show you the two different ways I make it: in a Dutch oven on the stovetop, or in an InstantPot. Both are great methods - it just depends on how much time you have. So let's get to it, and hopefully I can answer a few questions for you along the way.

How to Make Homemade Chicken Broth

As I mentioned, this recipe has been developed over years. And it was only recently I discovered the secret to making the best chicken broth: using the chicken thighs and legs. This was a game changer. The higher fat level in the thighs brought the flavour of the entire broth to new heights. I'm never going back to using a whole chicken, or a chicken carcass again. And bonus, with whatever recipe you're making this for, you have only the flavorful dark meat to work with after, so it makes the final dish taste better too, in my opinion. With that being said, most of the other ingredients are fairly simple, and the cooking methods, whether it's on the stovetop or in the InstantPot and easy too.

This is the classic method, tried and true. For this, you're going to throw all your rustic ingredients (see below for the ingredients) in a large Dutch oven or stock pot, cover it fully with water, bring to a boil, turn it down to a simmer, and then let it go for three hours. Bonus: doing it this way ensure your entire house smells like your grandma's kitchen on cold winter days. Who doesn't want that?

If you're short on time, this is the way to go. But be warned, you need to have a large InstantPot to do it. I've overfilled mine while making this recipe before, and the results aren't pretty (actually, the broth still tasted great, but when I released the steam one the InstantPot, a bunch of the broth came out with it and splattered all over my kitchen walls. Whoops.)

Learning how to make homemade chicken broth in the InstantPot starts much the same way as it does on the stovetop. Throw all your ingredients in, cover everything with water (making sure you don't go over the max fill line; in fact, I would go a below it just to make sure). Select pressure cooker, set the level to high, and set the timer for 1 hour. Carefully release the pressure, and you should be good to go!

After the chicken broth is cooked, let it cool slightly so it's safer to handle. Remove all the chicken thighs, take out the bones and skin (I use tongs and a fork for this while they're still quite warm, it's much easier to separate the meat this way), and save the meat for another purpose.

Meanwhile, strain the broth into a large bowl, and separate into your storage containers if you're not using immediately.

One of the things I love about homemade chicken broth is how simple the ingredients are. Most of the time you'll have all this stuff in your fridge or pantry, but here's your grocery list:

And that's basically it. I will sometimes try different variations by adding parsnips, fennel, thyme, oregano or lemon (feel free to experiment! They are all delicious!), but this is the basic recipe I find myself going back to over and over again.

The Benefits of Homemade Chicken Broth

There are lots of health benefits to homemade chicken broth: it's full of fatty acids, protein, and vitamins depending on what vegetables you're using. It's also relatively low in calories, with about 12kcal per cup (although this recipe will likely be slightly higher because of the fat content). The one thing you have to watch out for is the level of sodium. But this is one of the awesome benefits of learning how to make homemade chicken broth: you control the level of salt you put in.

For me though, there are two main benefits that have nothing to do with health. First, it's nostalgic and makes me feel better when I'm sick. Second, it tastes so damn good. Like way better than the store-bought stuff. It's also easy to freeze, so you can whip up a batch and have some on hand for whenever you need it. Or just use the quick cooking version in the instant pot.

Ok first things first: how long can it last in the fridge? It will last about four days in an airtight container. Pour the freshly made broth (carefully) into smaller containers, and let it cool in the fridge. You don't want to let it sit on the counter for too long at room temperature.

Using this same technique, you can freeze it for up to six months as well.

To check if it's gone back, smell it. Cooled chicken broth has a pretty pungent odor, but if it's gone bad, it will be pretty unpleasant and potentially sour smelling. Also, if the container it's in is swollen, definitely a bad sign. Toss that right in the garbage.

What Can you Make with It?

Honestly, the sky's the limit once you learn how to make homemade chicken broth. You can use it in countless recipes to up the flavour profile and complexity (have you ever tried boiling mashed potatoes in broth instead of water? Life changing!). Polenta is also another great way to use chicken broth. I love using it in place of beef broth for things like Bolognese pasta sauce (I just find it's too intense sometimes, ya know?) And of course, there's always the classics: homemade chicken noodle soup, chicken and dumplings, chicken stew, the list goes on and on. And I promise, all of those recipes are going to taste a lot more gourmet once you start making your own broth.

Does homemade chicken broth need to be refrigerated?

Yes, it needs to be stored in the fridge or freezer.

4 days in the fridge, and up to 6 months in the freezer.

How long does it take to make homemade chicken broth?

On the stovetop, it takes 2.5-3 hours. In an InstantPot, it takes one.

Why is homemade chicken broth cloudy?

It's just because of the particles from the fat and other ingredients you're cooking it with. If you want to change that you can try cooking it more slowly, only ever letting it simmer and not bringing it to a full boil.

Why is chicken broth gelatinous?

The gelatin comes from the collagen in the chicken bones - not the fat. It's not a bad thing though, the collagen adds tons of flavour! 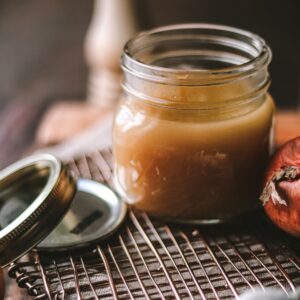 There's little better than a simple, homemade chicken stock. It's the foundation from which many of our most favourite, comforting dishes are made. This version levels up the flavor by using only bone-in, skin on chicken thighs rather than a whole raw roasting chicken. The stock it creates is savory, decadent, and beyond delicious.
Print Recipe Pin Recipe
Prep Time 10 mins
Cook Time 3 hrs
Instant Pot 1 hr 15 mins
Course Soup, Stock
Cuisine American
Servings 8 cups
Calories 149 kcal

On the Stove Top

In the Instant Pot

You can adjust the salt in this recipe to suit your taste or health needs. I usually adjust the salt level after the broth has been strained. Typically, I find it needs quite a bit of salt to keep the stock from being bland!