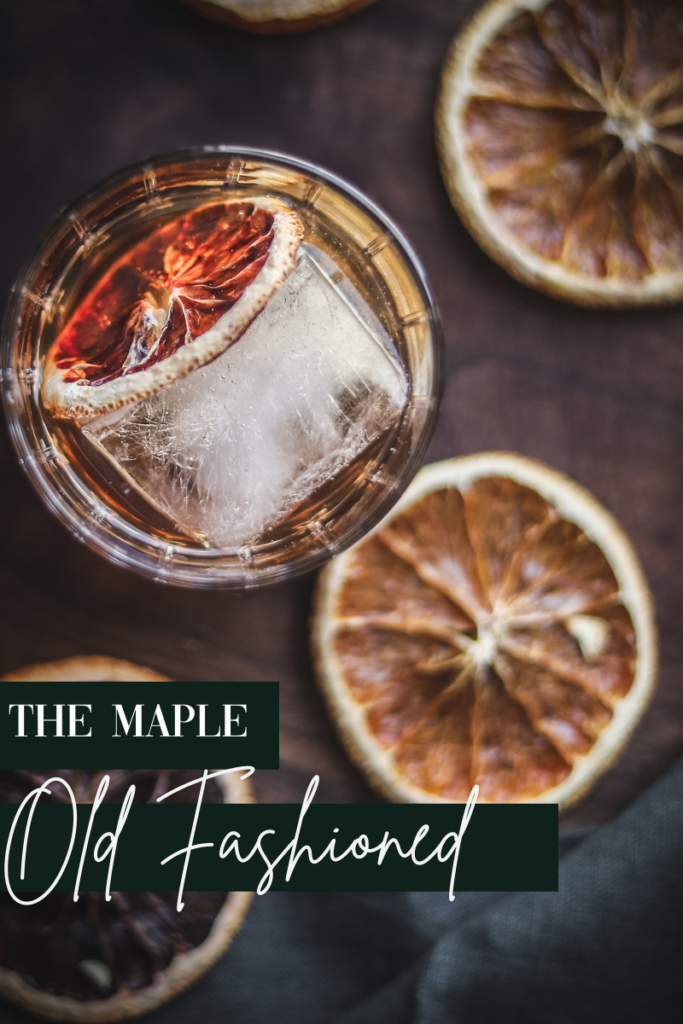 Welcome, friends to one of my favourite drinks: the maple old fashioned. This cocktail is booze forward, but balanced out by the maple flavour, hit with some citrus and cherry for an amazing nuanced drinking experience. While I think you can totally drink this any time of year (what can I say, I'm Canadian, and maple syrup season is 12 months a year), it definitely goes best with a cozy fire, an thick pair of socks and a well-worn novel.

What Goes in a Maple Old Fashioned?

One of the best parts about this cocktail is how few ingredients it takes, and how easy it is to make. It consists of:

And that's it. If you can't find orange bitters (obsessed with these orange and juniper bitters from Bittered Sling, btw), you can definitely swap them out for something else, think cherry, cinnamon or some other warming winter spice. Don't skip out on them entirely though, they're pretty necessary to balance out the overt sweetness of the maple syrup.

Also, I feel like this should not need to be said, but please, for the love of god, use real maple syrup in this recipe.

The flavours you pick up will vary depending on the whiskey or bourbon you use. Again, a whiskey with notes of winter spices, like cinnamon, clove, and allspice work well with this recipe. Of course, maple will be one of the predominant flavours. Orange you can pick up from the bitters, but also the aroma of the fresh peel we're going to rub around the rim of the class. Finally, a brandied cherry adds a depth of flavour to the cocktail - making it a winter classic, and with some similarities to the Amaretto Sour.

This is an incredibly popular cocktail to try smoking with, because all of the flavour notes already go so well with that smoky aroma you get. Plus, this will honestly transport you to a mountain cabin beside a roaring wood-burning fire while fat snowflakes fall softly outside the window (aka my version of heaven). If you have a smoking gun, I highly encourage you to give it a try! If you don't have one, getting one will up your home-bartending game by approximately 1000% because it's so much fun.

The Best Whiskey to Use

In a typical old fashioned, we'd be looking for a Goldilocks whiskey or bourbon: not too sweet, not too spicy, something smooth that slides into the "just right" category. With a maple old fashioned, we have to consider whiskeys that pair well and will hold up to the rich and sweet maple syrup. Here's a few suggestions: 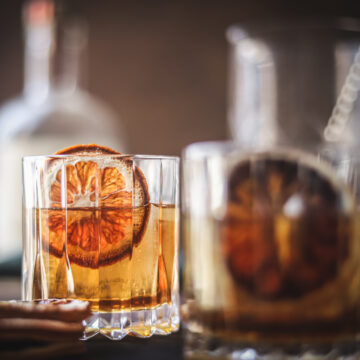 The maple old fashioned is a twist on a classic that for me, has become a go-to winter sipper. The whiskey brings the boozy flavour, the maple brings the sweet, and then we add some bitters and fresh citrus aroma to balance the whole thing out. Best served in front of a fireplace. For smoking tips, see notes!
Print Recipe Pin Recipe
Prep Time 7 mins
Course Cocktails, Drinks, Happy Hour
Cuisine American, Canadian
Servings 1 person
Calories 178 kcal

If you want to smoke this cocktail, by all means go for it. If you're making more than one cocktail, I would suggest mixing the whiskey, maple syrup and bitters in the cocktail mixer without ice, and then capturing the smoke in the mixer with plastic wrap, or some heavy piece of wood, like a cutting board.  For individual drinks, again, capture the smoke in the glass with a heavy lid, getting as tight of a seal as you can. If you're adding ice, do this at the end.