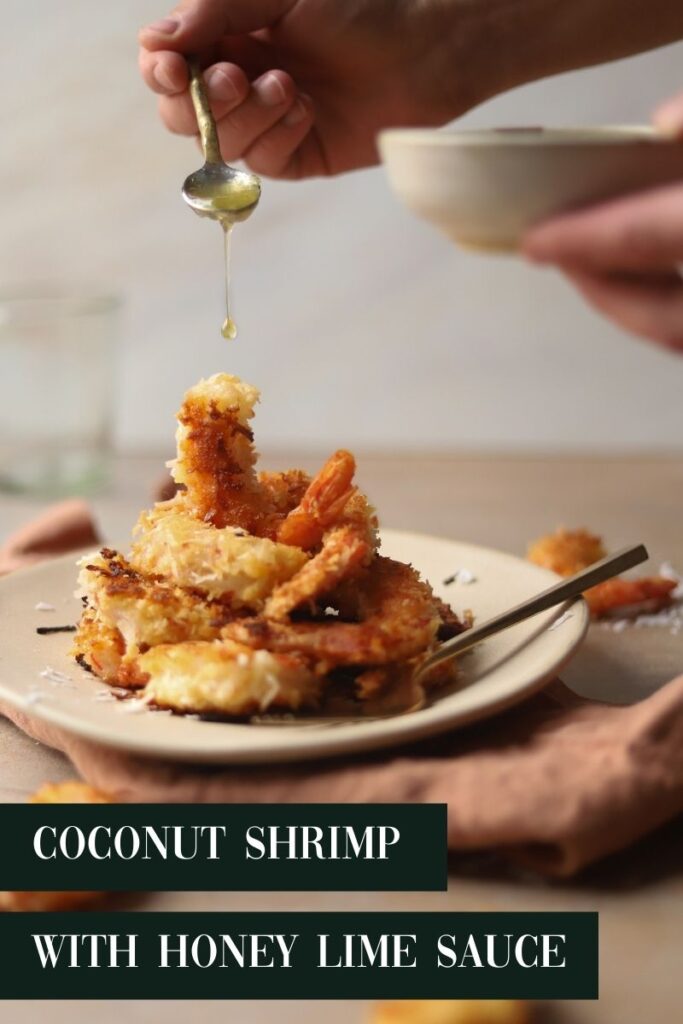 Fried coconut shrimp is the absolute best appetizer. It's easy, and everyone loves it, any time of year. Serve it up with a ginger lime honey dipping sauce and the sauce and it's just *chef's kiss*.

What is coconut shrimp?

Coconut shrimp is shrimp that has been battered with breadcrumbs or coconut flakes. Typically it's fried, but it can also be baked.

What do you eat coconut shrimp with?

Coconut shrimp is often served with different sauces to go with it, for example, sauces flavored with coconut, lime, honey, or other tropical flavors.

While shrimp itself is low in fat, adding the breading and frying definitely makes it less healthy than roasting or boiling it.

Why Fry Rather than Bake?

To me, baking coconut shrimp is a great option if you're looking for a healthier take. But to get that crispy coating, frying is the way to go. It's hard to get the same result when you bake it.

That being said - it's also way easier to bake them. Just throw all the shrimp on a baking pan at once, bake, and take out of the oven. No standing over a hot stove.

Should I Leave the Tails On?

Yes, but it doesn't matter that much. It just makes it easier to flip them over while your frying them. If some fall off or they come with their tails off, don't worry about it.

Do you have any Other Dips I can Try?

I sure do. I made a whole post about different dips to try with any kind of shrimp, including coconut.

How to Make Fried Coconut Shrimp

Making Fried coconut shrimp is pretty easy, but there are a few steps, and you do have to stand over a frying pan. That being said, it's a basic battering method for almost anything you fry, so here we go.

For this recipe (and most shrimp recipes) I really prefer Argentinian shrimp. Argentinian shrimp are caught off the coast of, you guessed it, Argentina. Unlike other species of shrimp, the are red when they are pulled out of the ocean, and when they're raw (so the shrimp turning pink isn't necessarily an indicator of doneness). They have a super sweet flavour and a beautiful meaty texture that some have compared to lobster. Once I tried them, I haven't looked back.

You can absolutely sub your favourite type of shrimp in this recipe though. They all work!

Ingredients for the Dipping Sauce

This I kept this one as simple as possible:

There are three different steps to this batter. First is the base layer, which is a mix of flour and cornstarch. Whenever I'm frying something with a batter, there is cornstarch involved. It's the secret ingredient to making everything extra crispy.

So, we're going to have three shallow bowls or pie plates. In the first is our cornstarch and flour mixture. The second is two lightly beaten eggs, and in the third is a mixture of panko and sweetened coconut flakes. You can definitely use unsweetened if you want - I just have a major sweet tooth, so that's my preference.

At this point, you also want to make sure you are heating up your pan. I love my cast iron skillet for this. It just heats the oil so evenly, and it's non-stick as well. Pour enough vegetable oil in the bottom so it's completely covered, about three to four tablespoons. You might need to add more as you cook the shrimp in batches.

Now, one by one, dip the shrimp in the flour/cornstarch, then the egg, then the coconut and panko. It's super messy and goopy I know - you can use tongs if you want, but I find the batter just builds up on them until you can't even use them anymore. Next, lay them in your pan, making sure they have plenty of space around them. Cook for about 2 minutes before you flip them.

Pay careful attention to the amount of heat you're using. If the coconut is browning too fast, then turn it down. If the shrimp are overcooking but your batter still isn't golden, turn it up.

Flip the shrimp and let them cook for another two minutes. Remove to a paper towel lined plate, or better yet, a cooling rack over a baking sheet.

This one is easy. Gather all the ingredients, whisk in a small bowl, and that's it! Only add as much water as you need though - it tends to get runny super quick.

These guys actually do freeze pretty well. Place them on a cookie sheet in the freezer until frozen, and then store in a large freezer bag. Thaw and then reheat by placing them on a baking sheet in the oven at 350F for 10-15 minutes.

Seafood makes some awesome appetizers, and there's no limit of things to choose from. Here are some of my favs:

Coconut shrimp is everybody's favourite for a reason: it's delicious and so easy to make. The sweet, crunchy texture of the coating with the fresh honey ginger dipping sauce is to die for. This recipe calls for frying them, but would also work with baking them.
Print Recipe Pin Recipe
Prep Time 15 mins
Cook Time 15 mins
Course Appetizer, Happy Hour, Lunch, Snacks
Cuisine American
Servings 4 people
Calories 521 kcal

For the Coconut Shrimp

If you want a little heat, add a few red pepper flakes to the honey dip.  Watch the  heat of your pan, and adjust accordingly if the shrimp are cooking too quickly, or overcooking.