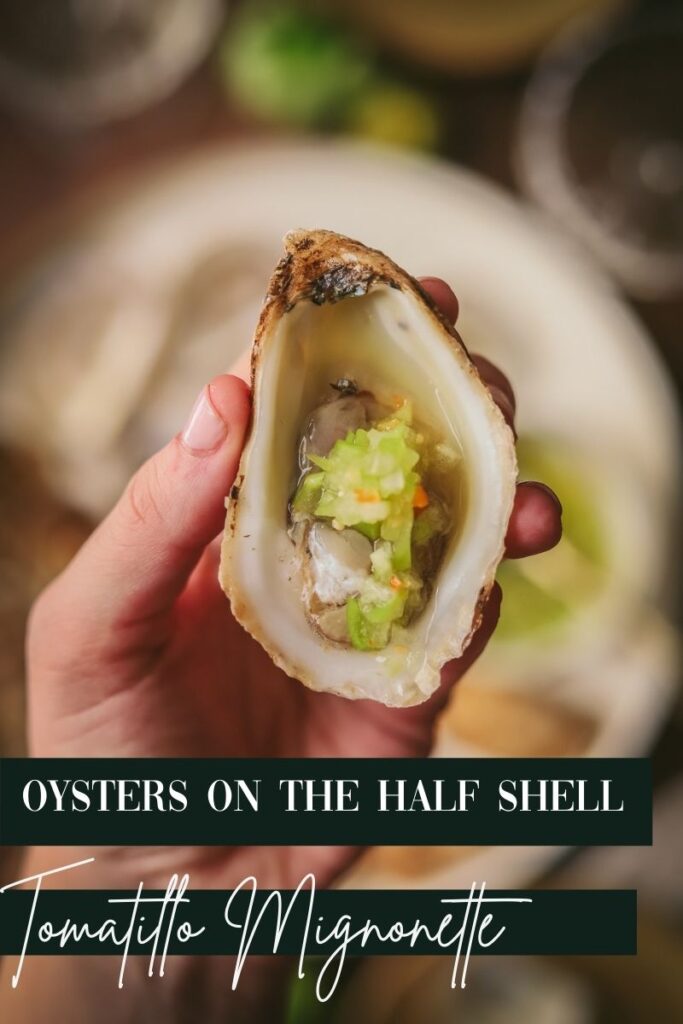 These oysters on the half shell are super fresh with the habanero bringing a little bit of a kick. Like all good mignonettes, this one is super simple, and requires only three ingredients!

What are Oysters on the Half Shell?

This is just a term used for the particular preparation. It simply means that the oysters are served raw (alive) and on the shell they came in. It's a very common preparation, and it's totally delicious.

Oysters have a great flavour that differs depending on where they come from. Atlantic, cold water oysters (like those in Easter Canada and the Northeastern Seaboard in the U.S.) are briny, salty, and have a slightly bouncy, almost "crunchy" texture as you bite into them. Pacific oysters have more of a sweet, fruity finish. With this mignonette, we're going with some bold flavours to highlight the oyster:

And that's it! Three ingredients (plus the oysters and a little seasoning) and you're done!

How to Prepare and Eat Raw Oysters

This is actually where most people get tripped up. I get it, ok? I was super intimidated by oysters on the half shell for the longest time. They looked weird, and I could not figure out how that texture was going to work. But I promise once you get past this, they are so worth it. So let's start with the preparation.

P.S. I have a whole guide on everything oysters - so if it's your first time or you need a refresher, check it out!

First, you need to make sure the little guys are good. Try to get them from a local fish market. Ask questions of your fish monger - they are so knowledgeable! If you're worried, tell them. Ask them about the different sizes and flavours of the oysters they have, and where they're from. Oyster from the pacific tend to have a sweeter flavour, while those from the Atlantic are more salty and briny. Make sure the shells are closed. If you get home and any of them are open, throw them out.

You also don't have to store oysters on ice, although it is nice to serve them on it. You can keep oysters for up to a week in your fridge.

Shucking oysters, especially the first few times you do it, can be a bit of an ordeal. They're wily bastards, and they don't take especially kindly to being forced open. Check out this video I made that walks you through the basics:

And remember, don't give up! You can do it! If you're new, just plan on it taking you a few extra minutes. Oh, and don't forget, you're going to need an oyster shucker and, if you want, oyster gloves for safety.

How to Serve Fresh Oysters in the Half Shell

Once you've got the oysters shucked, with most of the liquor in tact, hopefully, you're going to want a very large serving platter covered in ice to lay the oysters on. You can use regular ice cubes, but crushed ice is the preferred method. In addition to the Champagne mignonette, I like to serve fresh lemon wedges, regular hot sauce, and grated horseradish. These are all classic pairings with oysters, and it's great to give people some options.

Again, the go to here is Champagne, especially if you're serving it with Champagne mignonette. The bubbles in the Champagne pair so well with the texture of the oysters which is super smooth. Another great recommendation is a Sauvignon Blanc. The high acidity and the notes of lemon make it a particularly great pairing alongside the oysters. It also goes well with tomatillo salsa, and the flavours that inspired this mignonette.

Typically, I like to serve oysters as an appetizer, but if you're doing more of a cocktail party, or even if you want the oysters to be the main event, there's definitely some great options. Try something like a potato salad, or if you're going with a steakhouse theme, Romesco flank steak and Caesar salad are good options too!

What are oysters on the half shell?

It just means raw oysters served in the shell they came with.

What kind of wine should I serve with oysters on the half shell?

Champagne is a classic, but a Sauvignon Blanc also pairs very well.

Are oysters on the half shell alive when you eat them?

Yes! In fact that's the safest way to eat raw oysters. And you'll know it if they're dead when you open the shell. The smell will make you want to burn your house down. 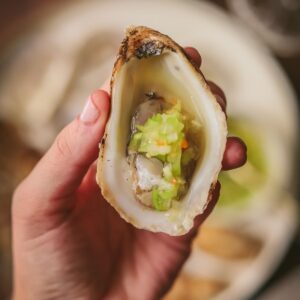 Oysters on the Half Shell with Tomatillo and Habanero Mignonette