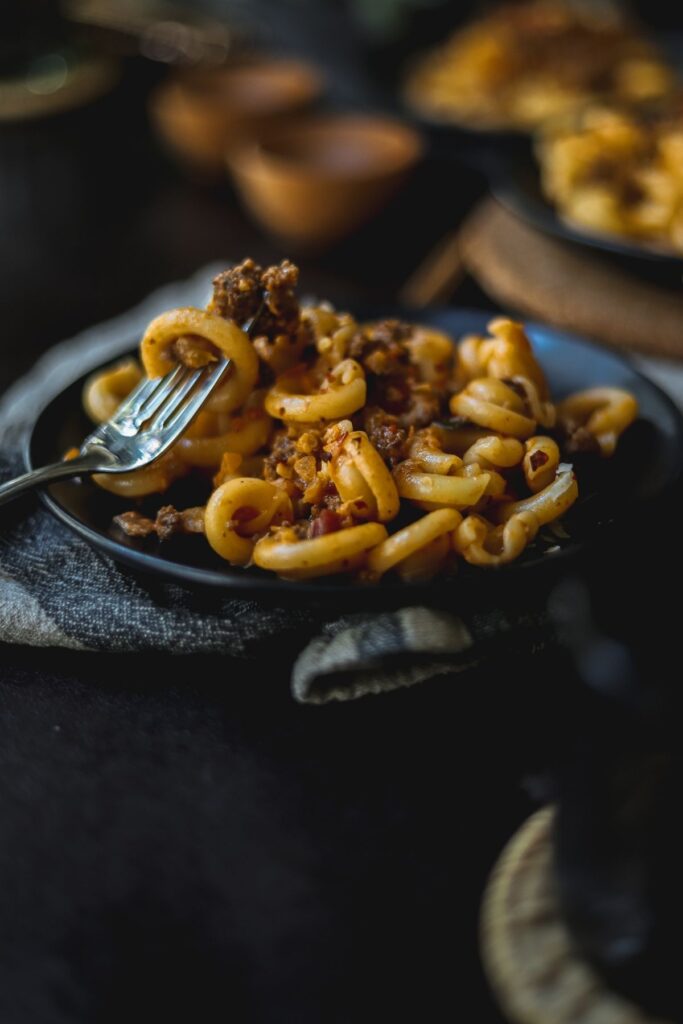 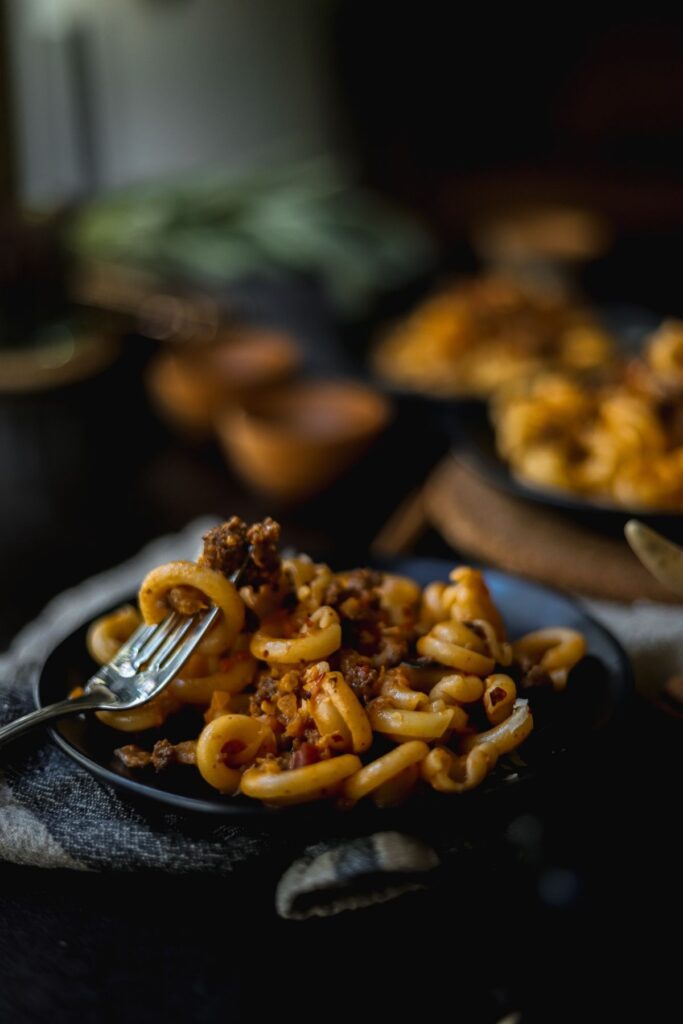 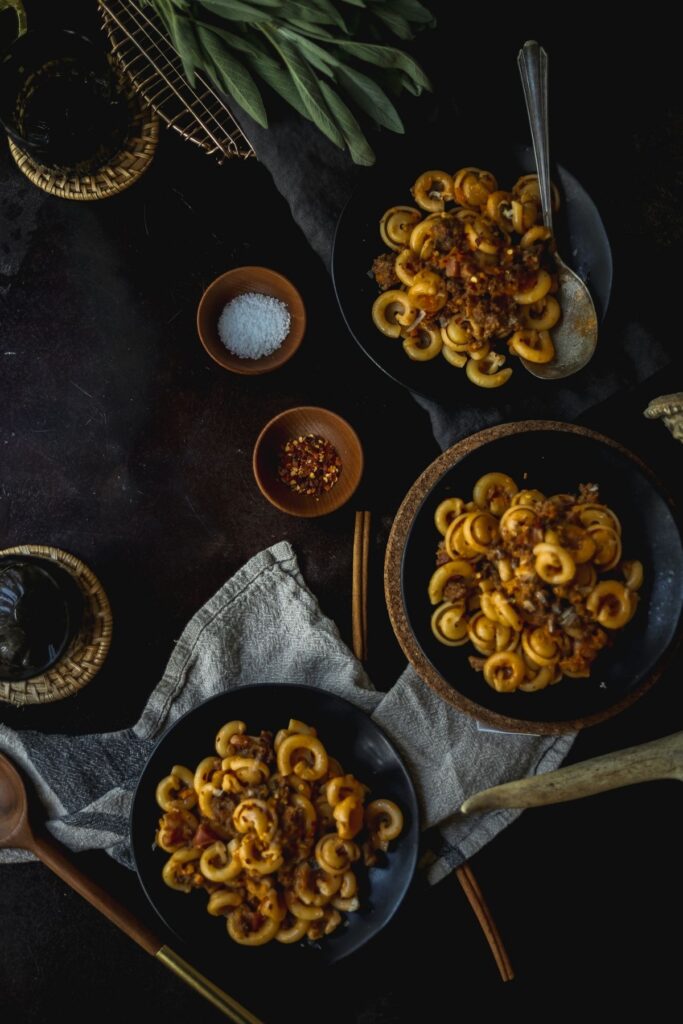 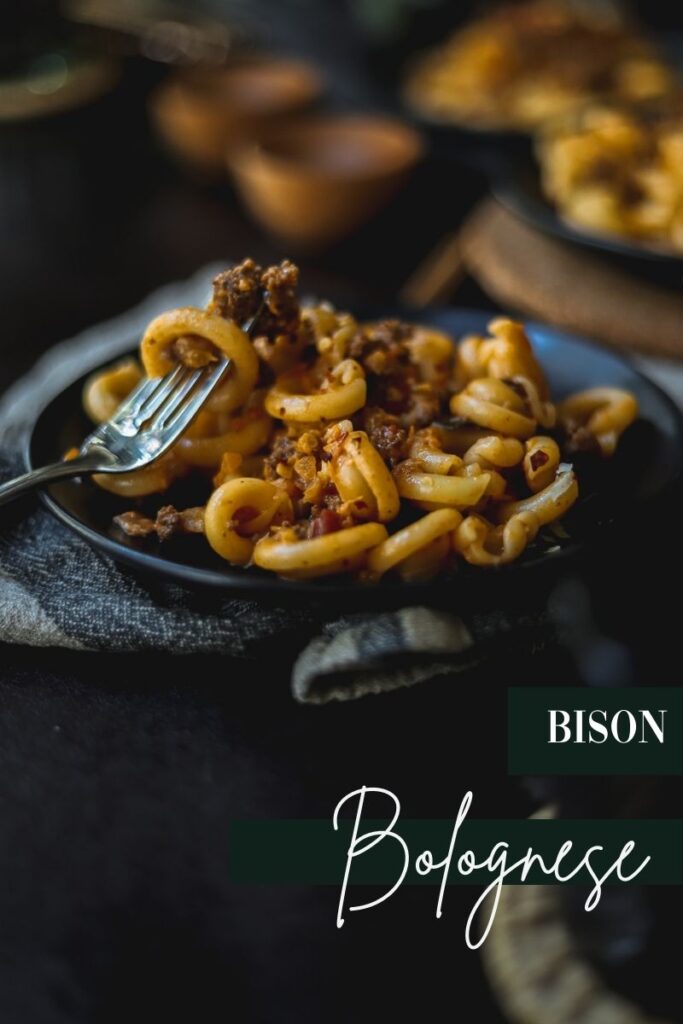 If you follow me on Instagram, you'll know that I love bison. One of the best parts about us moving to Alberta is the abundance of game meats here for me to experiment with. It's so fun to cook with, has great flavour, and is really, really versatile. This weeknight bison Bolognese came out of me looking for a way to cook with ground bison without making burgers (although they are also great).

The best part about this dish? I use tomato paste, so the intense flavours cook really quickly, eliminating the need for hours of simmering. Voila! Weeknight bison Bolognese!

Growing up in Ontario, bison was just not an ingredient we had lying around. In fact, I don't remember seeing it until I was in my late twenties. Thankfully now, there are a few bison farms starting up in Ontario, and it's much more prevalent. When we moved to Alberta, it was everywhere, and my curiosity was peaked, although I was skeptical. Is it really that much different than beef? The answer is yes and no. The flavour is different, but definitely has many similarities. But the texture? Next level.

One of the positives and negatives about bison is the lack of fat content. For recipes like bison short ribs, I actually love this. It means the braising liquid isn't covered in grease when it comes out of the pan, and the ribs are still fall-off-the-bone texture. In ground bison though, I usually need to add some type of fat content, like butter. Not only does this help enhance the flavour, but it helps soften up the texture of the meat, which can be quite tough. In this recipe we're using, wait for it, BACON!

For bison Bolognese, I make use of a food processor. It allows the veggies and bacon to cook down quickly, again cutting back on that cooking time to make it a weeknight bison Bolognese. I never realized that you can actually food process bacon, but it works like a charm! It crumbles it down so it mimics the texture of the ground meat. Perfect for this recipe.

From there, it's a pretty standard Bolognese cooking process (but you only have to simmer for 20 minutes!)

I really, really love the aromatics in this recipe. Of course, we're using red wine to braise, and then some more woody herbs like thyme and sage. But the secret ingredient? Cinnamon. You heard me. Throw a cinnamon stick in the pot at the beginning of the braising process and you will have this amazing je ne sais quois - ness about the dish that no one will be able to put their finger on. It's amazing, and pairs beautifully with the bison.

You definitely want to use something sturdy for this meal. A rigatoni of some kind would be ideal. Because I love experimenting with pasta shapes, I used funghetto for this one. So fun to look at and to eat!

It has a slightly sweet, earthy flavor. Many people prefer it to beef!

Where can you get bison?

It's becoming more and more popular, so in some places you can find it at your local grocery store. If not, check with your local butcher. They may have some or could potentially order it in for you.

Why is bison so expensive?

Bison farming just doesn't happen in the same large-scale that beef farming does. That's also why you may not bison recipes that often on restaurant menus. There's just less of it, and that makes it cost more. 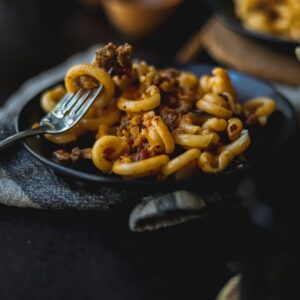 Using pancetta is key here as it ups the flavour in the bison! Same with the tomato paste - you can use crushed tomatoes, but the flavour is far less intense, so it would require simmering for longer.