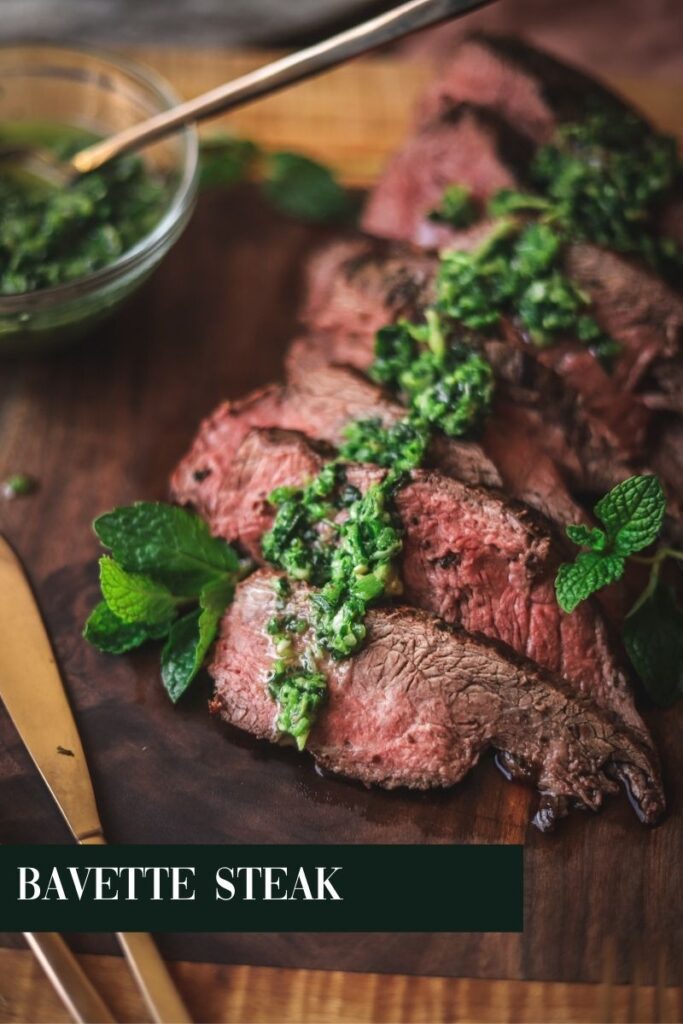 This bavette steak recipe is absolutely perfect for grilling, or cooking in a screaming hot cast iron skillet. It's an amazing cut of beef because it's super flavorful, and we're going to make sure that it comes out beautifully tender by cooking it properly (which means a meat thermometer).

We'll go into exactly what bavette steak is in just a second, but it's a cut of meat that's super economical and also tasty! It's similar to a flank steak in all the different ways you can prepare it, you just don't necessarily have to marinate it. It's both a weeknight dinner, and one you can pull out to impress guests.

Bavette steak is going to be your new favorite cut of beef. It's so flavorful, and very tender, so it doesn't need to marinate for long periods of time!

What is Bavette Steak?

Bavette steak is is a long, flat, and triangular cut that comes from the bottom sirloin, and it's wedged just in-between the sirloin and the flank.

This cut, while also called a flap steak, is commonly mistaken for hanger steak or flank steak, but it's definitely not the same thing. The bavette steak is different in shape, and the muscle fibers and graining are much looser than on a flank steak, meaning you can get a away without marinating it (super flavorful and tender? Count me in!).

Is it Different from Flank Steak?

Alright, so flank steak and bavette steak are both cuts of beef that come from the same general area of the cow, but they're just a little bit different.

Flank steak is a little bit leaner than bavette steak and comes from the lower chest of the cow. It's a long, thin cut of beef that has a lot of flavor, but can be a bit tough if it's not cooked properly. It's usually sliced thin against the grain for serving and it's great for dishes like fajitas and stir-fries.

Bavette steak, on the other hand, comes from the area near the flank, right next to the sirloin. It's a little bit thicker than flank steak and has a lot more marbling, which means it's got a lot of fat running through it. This makes it really tender and super delicious, but also makes it a little bit more expensive than flank steak. It's generally cooked by searing or grilling and it's perfect for simple preparation, letting the natural flavor of the meat shine through.

Where can you Buy It?

I've found that it's definitely not a common cut you can find in most grocery stores. I've always had luck though, at my local specialty butcher's, who not only have it, but are great sources of information on what it is and how to cook it.

This is an easy list. You just need the steak! One steak will feed up to four people, as they're quite large. Add some salt and pepper to season, and you're good to go. The chimichurri marinade is where we need to get a few more ingredients.

For the Chimichurri Marinade

This is definitely a bit of a different take on chimichurri - and if you have a different favorite recipe, then go ahead and use it! I love the flavor that the poblano and jalapeno bring to this dish though.

How to Cook the Bavette Steak

Before we start cooking the steak, you can marinate it for a few hours if you want, but you don't have too. One of the best parts about this steak is that it's tender, so it's not necessary to marinate it like it would be say, a flank steak. However, the marinade definitely helps with the flavor, so if you have time, go for it!

So, first things first, let's make the chimichurri marinade. It takes about five minutes, and comes together in a blender, so it really could not be easier!

Here's what your meat thermometer needs to read for the different levels of doneness:

It's important to keep in mind that these are guidelines, and the ideal temperature may vary depending on personal preference.

It is also important to take note that bavette steak has a thick muscle fibers, and so it will be most tender and flavorful when cooked to medium-rare or medium. Cooking it well done may make the meat dry and less juicy.

How to Slice It

Slicing a bavette steak can be a little bit tricky because it's got a thick muscle running through it, but once you know the right technique, it's super easy.

First thing, you want to make sure that your steak is rested for a few minutes before slicing. This allows the juices to redistribute and ensures that the steak will be nice and juicy.

When you're ready to slice it, the key is to slice against the grain. This means you want to slice perpendicular to the lines of muscle fibers. This helps to break down the fibers and make the steak more tender.

Here's what to do:

Keep in mind that the slicing should be thin enough to make the meat tender. When slicing a bavette steak, you want to aim for pieces that are about ¼ inch thick. This will make it easy to chew and enjoy the great flavor of the steak.

Also, if you feel that you're having trouble slicing through the thick muscle, use a sharp knife and apply more pressure.

Dry the steak: Before cooking the steak, make sure it's dry by patting it with paper towels. Moisture on the surface of the steak will prevent a good sear from forming, which is key for a delicious crust.

Season it up: Season the steak generously with salt and pepper on both sides. This will help to bring out the beefy flavor of the steak and make it taste even better.

Heat it up: Make sure your pan, grill or broiler is hot before adding the steak. High heat will help to create a nice crust on the outside while keeping the inside tender and juicy.

Don't move it around: Once you've put the steak on the heat, don't touch it or move it around. Let it cook on one side undisturbed for a couple of minutes before flipping it over. This will help to prevent the steak from sticking to the pan or grill and will make it easier to get a nice crust.

Rest it: After cooking the steak, let it rest for a few minutes before slicing into it. This will allow the juices to redistribute throughout the steak and make it more juicy and flavorful.

Slice it properly: When you're ready to slice the steak, make sure to slice it against the grain. This will help to make it more tender and easier to chew.

Pair it up: Bavette steak pairs well with robust wine, bold reds such as Malbec, Syrah/Shiraz and even a big buttery Chardonnay will match perfectly with its beefy flavor, you could also try it with a dry and aromatic rosé.

How to Serve it

This steak is so versatile, you can try it (and this chimichurri marinade) grilled or as steak fajitas. Here's what I'm serving alongside it:

If you're looking to pair a wine with your bavette steak, you've got a few options that would be delish.

If you like a nice red wine, a good choice would be a Malbec or a Syrah/Shiraz. These wines have bold, rich flavors that will complement the beefy taste of the bavette steak perfectly. They both have nice tannins and acidity to cut through the fat of the steak and bring out the flavors of the meat.

If you're more of a white wine person, try a big, buttery Chardonnay. The rich, oaky flavor of the wine will pair well with the steak, and the butteriness will help balance out the boldness of the meat.

Another alternative would be to pick a dry and aromatic rosé. Rosés can be made from a variety of grapes, but they all tend to be light-bodied and crisp which make them great for cutting through the fat of the bavette steak.

When it comes to wine and steak, always remember, it's all about finding a balance between the flavors and textures of the wine and the meat. So, pick a wine that you like and you can't go wrong.

What is bavette steak?

Bavette steak is a cut that comes from the bottom sirloin. It's often confused with flank steak, and although similar, they are different. Flank steak has a much tighter grain, and therefore is tougher, needing to marinate for hours. Bavette can be marinated, but it's much more tender, so it's mostly for added flavor.

Definitely on high heat in a cast iron or on a grill. For the cast iron, you can finish it in the oven. It also makes great fajitas!

Bavette steak, also known as flap steak or sirloin flap, is super delicious because it's a very flavorful cut of beef. It comes from the area near the flank, which is a well-used muscle, so it's got a lot of beefy taste. Plus, it's got a decent amount of fat running through it, which adds to the flavor and makes it really tender. 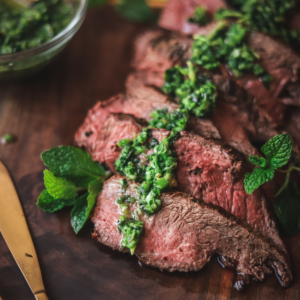 Bavette steak is flavorful and tender, without the need to marinate it for hours on end (although if you have the time, it does help make the steak more flavorful). It's also economical enough to make for a crowd, and it's sure to impress. The poblano chimichurri brings a fresh kick that pairs perfectly with the steak.
5 from 15 votes
Print Recipe Pin Recipe
Prep Time 10 mins
Cook Time 30 mins
Marinating time (optional) 4 hrs
Course Dinner, Main Course
Cuisine American, British
Servings 4 people
Calories 390 kcal