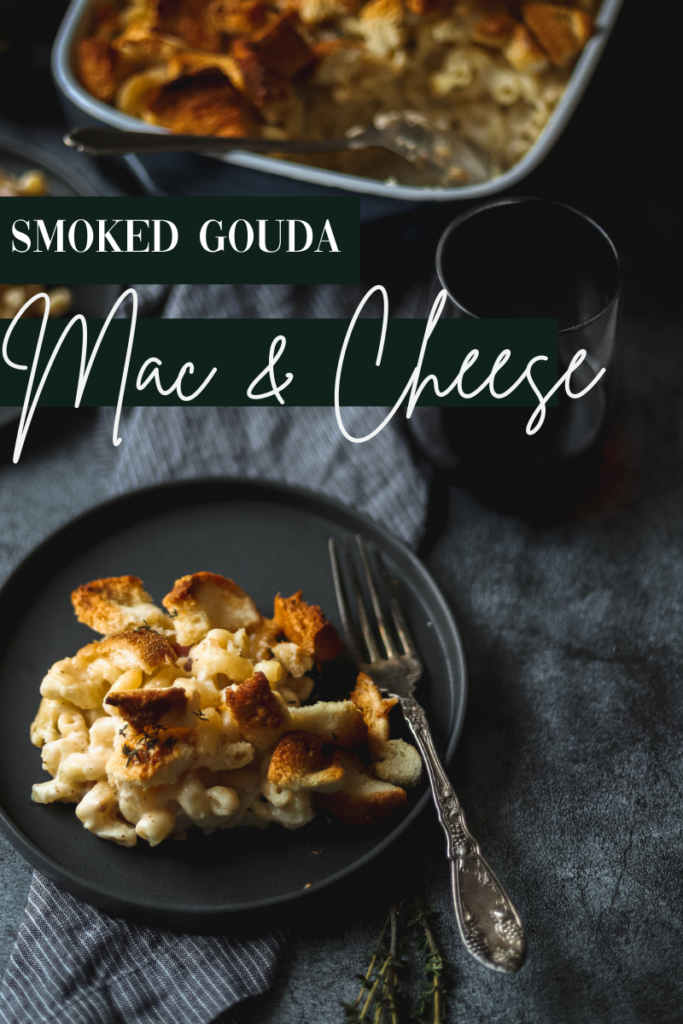 In my opinion, Smoked Gouda Mac and Cheese is normal mac and cheese but dressed up for company. This is 100% a big recipe you can serve to a crowd, the smoked gouda and old cheddar make it refined enough for a dinner party (it's perfect for Thanksgiving!), and of course, it's cozy enough to be oh-so-satisfying. Convinced? Let's go.

Honestly, making just plain gouda mac and cheese is a great idea, so if you can't find the smoked kind, don't worry about it. I'll also admit I have a bias: smoked gouda is my favourite cheese - ever. Like ever ever. And it's not even close. I love the creamy, yet firm texture, and I'm a total sucker for that salty, comforting feeling that smoke brings. Plus melts amazingly well, so it was a natural fit for me to create this recipe.

Harder though, was what cheese to pair it with. I didn't want the smoke flavour to be the only thing you tasted, and I needed something to balance it out, yet still hold it's own. Enter: old cheddar cheese. This sharp, salty and pungent cheese is the perfect foil to the strong smoke flavour coming from the gouda. In this recipe, I used them in a 1:1 ration (I tested a lot, and this was my preference, but feel free to switch it up if you want!).

There are lots of smoked gouda mac and cheese recipes that call for adding bacon, and yes, you can totally substitute that in this recipe if you want (see my notes for more on how to do this and what to watch out for). When it comes to cooking pasta though, I tend to lean more towards pancetta for a couple of reasons. First, it still brings the salt and the fat, but it isn't as over-powering as bacon. And second, even though there's still plenty of fat, it leaves the perfect amount. In this recipe, that's even more important because...

It's all in the Roux

Normally, you make the base of a mac and cheese sauce using a roux (it's a combination of butter and flour, that serves to thicken the sauce). In this recipe, instead of using butter, we're going to be using the fat from the pancetta. So not only are you going to have lovely little chunks of pancetta throughout the mac and cheese, but it's going to flavour THE ENTIRE SAUCE. This is not one of my worst ideas people. And it beautifully compliments the smoked gouda and old cheddar. DO NOT SKIP THIS STEP (again, you can totally do this with bacon fat, you just might have to get rid of some of it before you make the roux).

How to Make Gouda Mac and Cheese

Honestly, there is really nothing too complicated about this recipe. The only thing that's slightly different is using the pancetta fat to make the roux, but it's really just swapping the butter for the fat. After that, it makes like a pretty classic mac and cheese recipe. So don't be intimidated - we're basically just adding some different flavours. 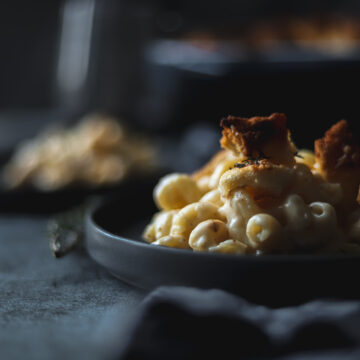 This smoked gouda mac and cheese recipe is full of sharp, nutty flavour with salt and smoke coming from the gouda and the bacon. It's like if your normal mac and cheese recipe got dressed up for dinner.
Print Recipe Pin Recipe
Prep Time 30 mins
Cook Time 45 mins
Course Dinner, Main Course, Salad, Side Dish
Cuisine American
Servings 8 people
Calories 853 kcal