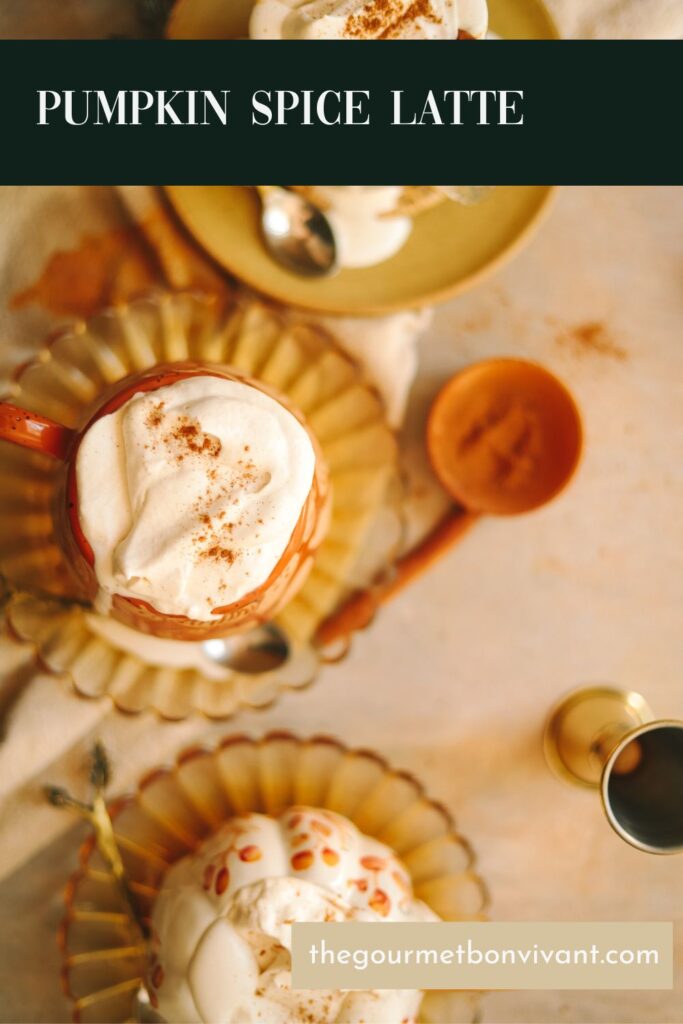 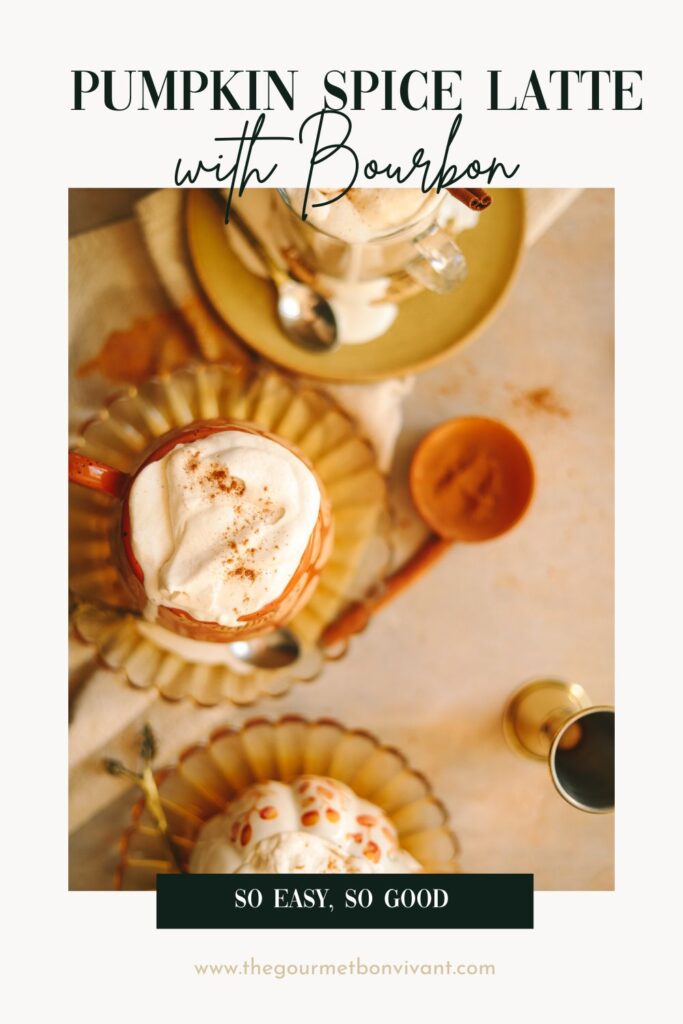 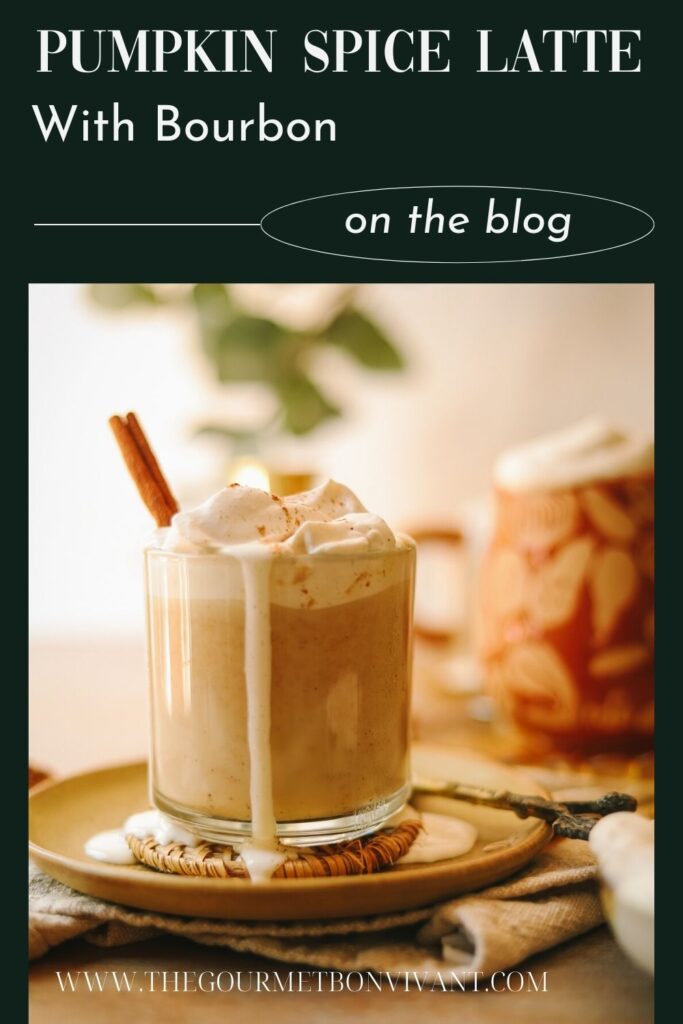 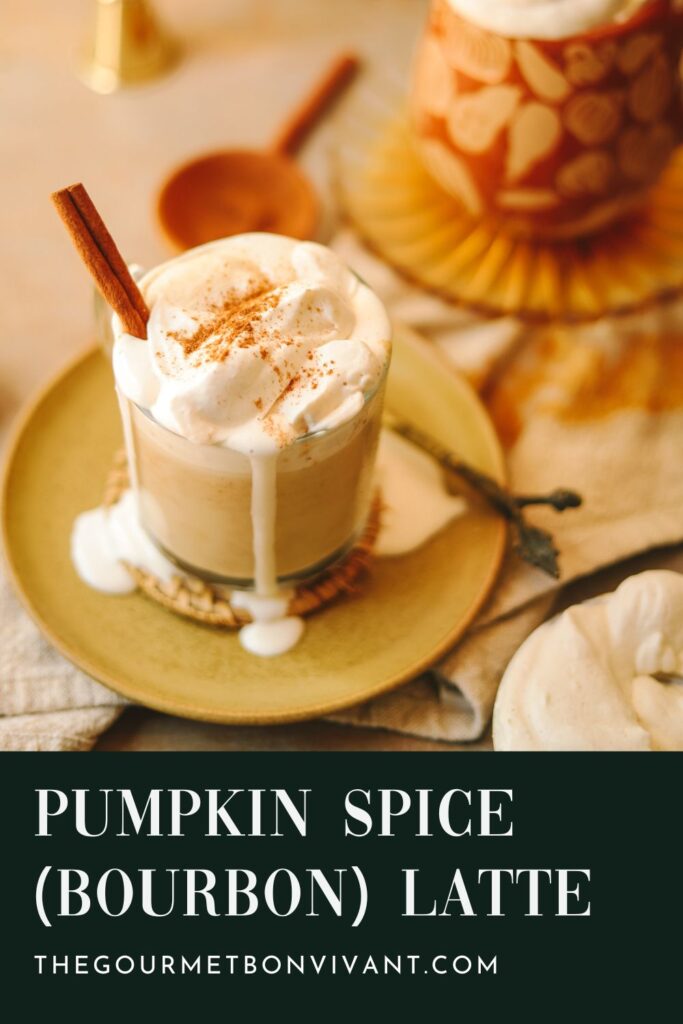 I cannot wait for you to try these boozy pumpkin spice lattes. Seriously. Listen people, there's a reason that the iconic PSL is so popular. It's delicious. In any form. I will drink them all fall long. But this recipe - this recipe right here - is my all time favorite. That's because we're upping the game.

How are we doing this? We're adding bourbon, and maple whipped cream (which also has bourbon). You're welcome.

This homemade boozy pumpkin spice latte with bourbon is the perfect fall treat. Easy, delicious, and full of cozy, warm flavors, the bourbon just takes it up a notch.

While it's in the name - it doesn't taste a lot like pumpkin. It tastes more like pumpkin pie spice, which is a combination of warming fall spices, like cinnamon, cloves and ginger. It also tastes a bit like coffee or espresso.

Does a pumpkin spice latte have caffeine?

Yes, traditionally it does. But you can absolutely make it with decaf!

How many calories does a pumpkin spice latte have?

Yes they are! They're popular for a reason. PSLs incorporate many of the flavors we love about fall, like cinnamon, cloves and nutmeg.

What is a Pumpkin Spice Latte?

Unless you've been living under a rock for the last 20 years, you've likely at least heard of the (in)famous pumpkin spice latte. First introduced by Starbucks back in 2003, it was a specifically designed fall drink that combined steamed milk, espresso, warm spices like cinnamon, nutmeg and cloves. It was topped with whipped cream and pumpkin pie spice. IMO - it tastes like a hug for your insides.

Initially, it had a fairly limited release as an experiment, but people went wild for it. The next year it was introduced across the country, and the rest, is history.

Since 2003, Starbucks has sold over 200,000,000 PSLs, and every major food chain from McDonald's to Dunkin' Donuts to Tim Horton's has come up with their own version of the drink. It's become synonymous with fall.

The pumpkin spice latte has gotten a bit of a bad rap lately simply because they're so popular. Which, I do not buy, on any level. How is it "basic" to like something that tastes good and that everyone else likes? You don't see me making fun of certain wildly popular consumer beers do you? And the DON'T actually taste good. Let us fans live, ok?

Why are we Adding Bourbon?

First of all you definitely don't have to. These are shockingly good on their own. But the bourbon flavor definitely takes it up a notch, and complements the warm spices that are already in the drink. I think it just makes the whole flavor profile more complex.

Also - I've added bourbon to the whipped cream as well (and used maple syrup as a sweetener). To me, all these things just scream fall and blend so perfectly together!

You can totally personalize this boozy pumpkin spice latte to your own personal taste and diet. Try it with oat milk, almond milk, soy milk, or any other plant-based beverage.

We're making this with coffee just because it's easier for most people, but if you can do espresso, by all means, go for it.

Not into the whipped cream? No problem, leave it out.

Too sweet? Halve the sugar.

And of course, you can make it without the bourbon - it's just as delicious!

For the Spiked Maple Whip Cream

How to Make A Boozy Pumpkin Spice Latte with Bourbon

Luckily, these are pretty easy (and easy to scale up or down), but let's walk through it step by step.

First, let's make the whipped cream. You can use either a stand mixer, a hand mixer, or an immersion blender for this, but I find the stand mixer does it the quickest!

Pour your cold heavy cream into a bowl, and whip on high until stiff peaks begin for form. Add the maple syrup, bourbon, and pumpkin pie spice, and mix until well combined. Set aside in the fridge while we make the lattes.

Combine all the ingredients for the latte in a medium saucepan over medium heat. Whisk together, and then heat the mixture until it's just starting to simmer. Take it off the heat.

Watch it like a hawk - like anything with milk in it, you turn your back for one second and the whole pot is boiling over.

Pour into two separate mugs, and then top with the whipped cream, and some extra pumpkin pie spice.

Other Amazing Cocktails to Try 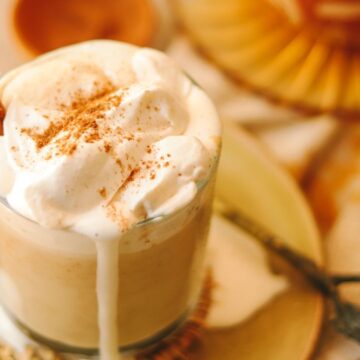 These pumpkin spice lattes are the perfect balance between warm spices, sweetness, with a hint of edge from the bourbon. You can't have fall without one, can you?
Print Recipe Pin Recipe
Prep Time 10 mins
Cook Time 10 mins
Course Cocktails, Coffee, Drinks, Happy Hour
Cuisine American
Servings 2 people
Calories 327 kcal

For the Maple Whipped Cream

If you're using a hand mixer, place the cream in a large bowl, and whip on the highest setting. This just took me quite a big longer than the stand mixer, so don't worry if it takes a while.  If you're using an immersion blender, use the whisk attachment, and carry on with the recipe.