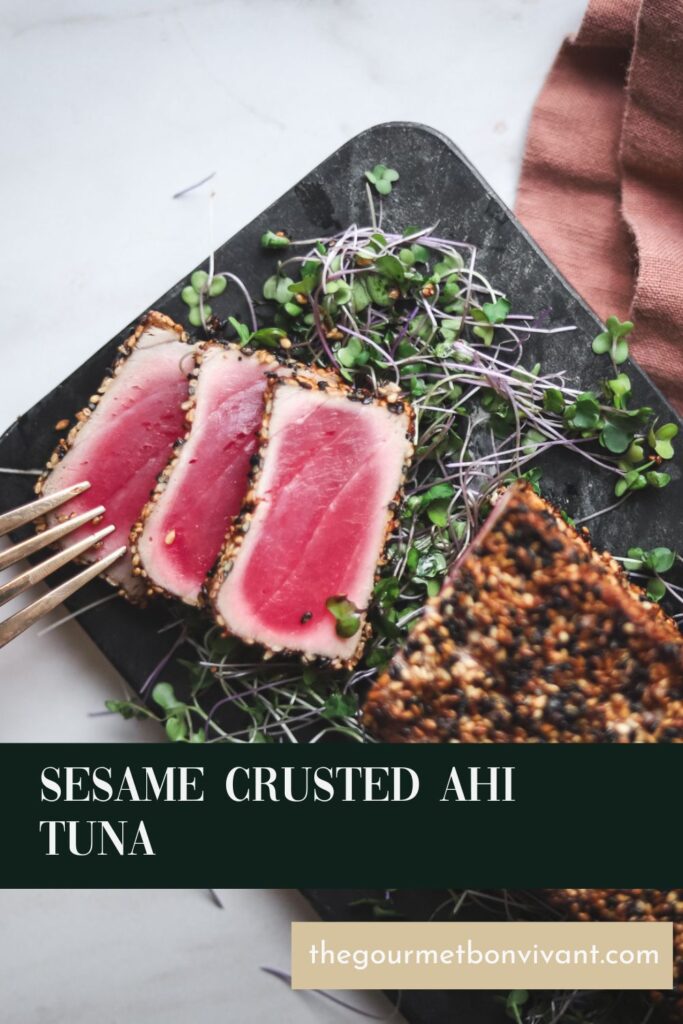 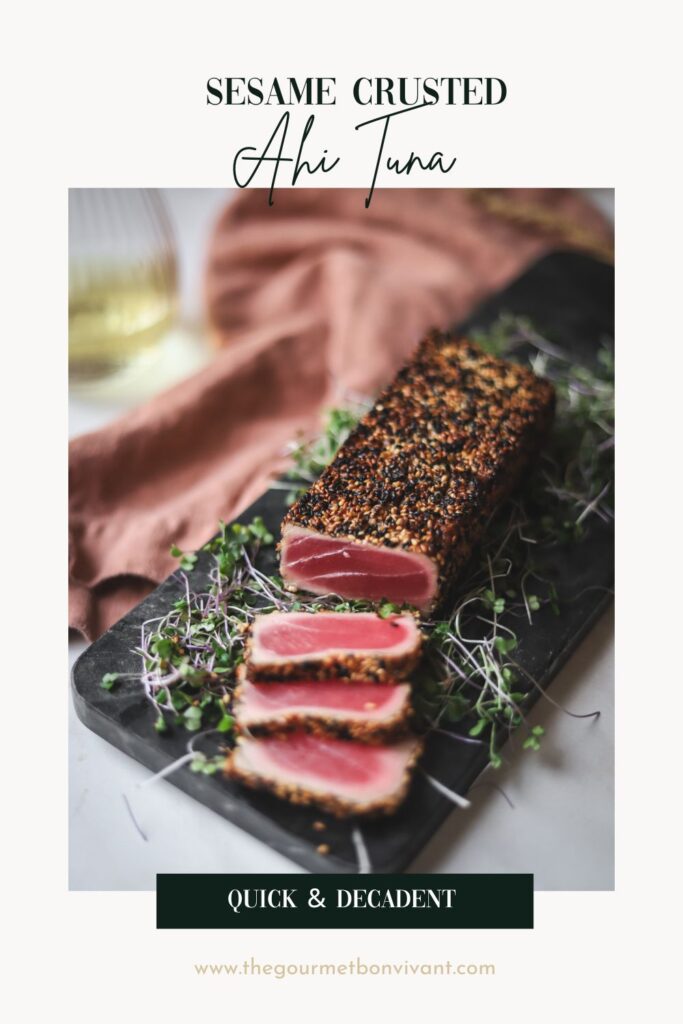 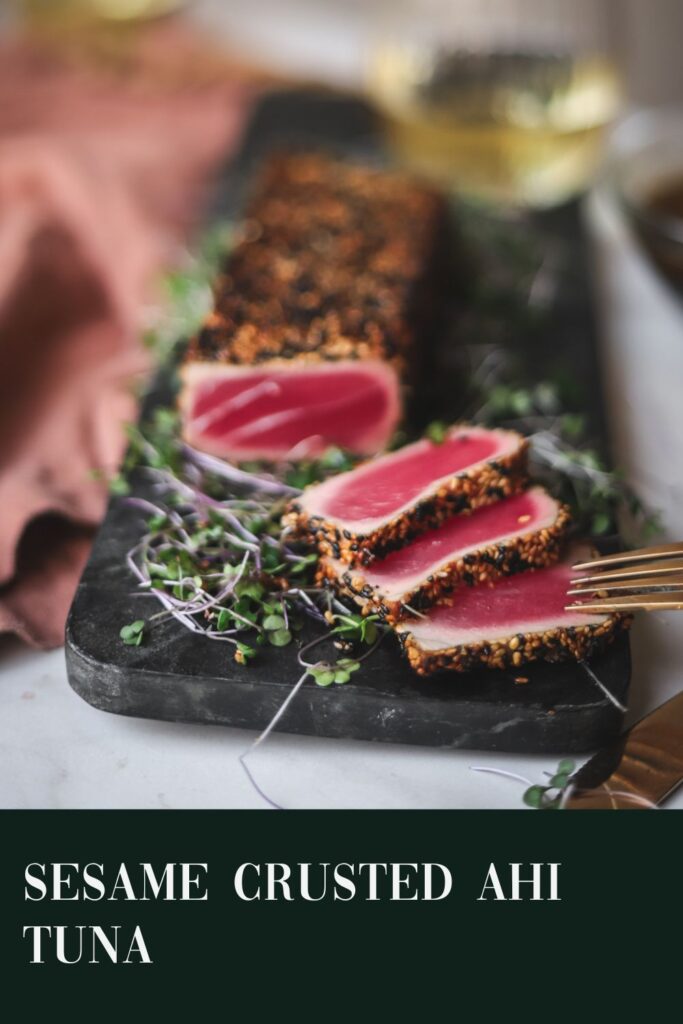 Ahi tuna is one of those seafood dishes that people can be intimidated to try. Which, I get it. There's a ton of seafood that's a) pretty pricy, and b) can be unappetizing if you don't cook it properly. Ahi tuna fits into both of those categories. But don't worry, we're going to do this together, and I promise, it's not that bad.

This dish is getting a ton of flavor from the sesame crust we're going to put on it. Not only does it contain sesame seeds, but also salt, spices and sugar for a tiny bit of caramelization. We're also going to pair it with a bomb, but super easy dipping sauce!

If you've ever had seared ahi tuna at a restaurant, then you know how incredibly delicious it is. Luckily, it's easy to recreate at home!

Seared ahi tuna is seriously delicious. It's got this amazing, rich flavor that's sort of like a cross between beef and fish. It's got a really firm texture, too, so it's kind of like a really fancy tuna steak. And when you sear it, the exterior gets all crispy and caramelized, which just adds even more flavor. So it's got this delicious, savory flavor from the searing, and this amazing, rich tuna flavor all at the same time.

Ahi tuna is typically seared quickly on high heat, usually on a stovetop in a pan or on a grill. This high heat cooks the surface of the fish, creating a crispy, caramelized exterior and leaving the interior raw or partially cooked.

How long does it take to sear ahi tuna?

The amount of time it takes to sear ahi tuna will depend on the thickness of the tuna steaks and your desired level of doneness. In general, ahi tuna is best seared quickly over high heat, as this helps to caramelize the exterior of the fish and preserve the moist, pink interior.
For medium-rare tuna, you will want to sear the tuna for about 1-2 minutes per side. For medium tuna, sear for about 2-3 minutes per side. If you prefer your tuna well-done, you will need to sear it for 3-4 minutes per side.

What Is Ahi Tuna?

Ahi tuna is a type of fish that's also known as yellowfin tuna. It's a pretty popular fish, especially for sushi and sashimi. It's got a really flavorful, almost meaty taste and a firm, meaty texture. It's usually a pretty bright red color when it's raw, but it turns a more pinkish color when it's cooked. You can cook it a bunch of different ways, but searing it is probably the most popular method.

Where Can I buy It?

You can buy ahi tuna at a lot of different places! If you're looking for fresh ahi tuna, your best bet is probably a seafood market or a high-end grocery store. These places usually have a good selection of fresh seafood, including ahi tuna.

You can also try checking out a local fishing pier or speaking with a local fisherman to see if they have any fresh ahi tuna for sale.

If you're not able to find fresh ahi tuna, you can also try looking for it at a restaurant or at a store that sells pre-packaged, frozen seafood.

Why are we Adding the Sesame Crust?

One of the main benefits of adding a sesame crust to seared ahi tuna is that it adds an additional layer of flavor to the dish. Sesame seeds have a nutty, slightly sweet flavor that pairs well with the rich flavor of ahi tuna. The seeds also add a crunchy texture to the dish, which can be a nice contrast to the tender, meaty texture of the tuna.

In addition to adding flavor and texture, a sesame crust can also help to protect the tuna from drying out during the searing process. The seeds can help to create a barrier between the heat of the pan and the tuna, which can help to keep the tuna moist and juicy.

For the Dipping Sauce

How to Make Seared Ahi Tuna

Preheat a pan or grill over high heat. You want it to be super hot.

In a small bowl, mix together the sesame seeds, salt, sugar, paprika, and garlic powder. Coat the tuna steaks on both sides with the mixture, pressing gently to help it stick.

Note: You may need to adjust the temperature of your pan to keep the sesame seeds from burning. At a super high heat, the burn really quickly, so it's best to turn the heat down slightly if you need too (especially if you want to cook it for longer!).

Take the tuna out of the pan or grill and let it rest for a bit. In the meantime, make your dipping sauce by combining all the ingredients in a small bowl, and whisking together.

Just like steak, you can choose from different levels of doneness when it comes to ahi tuna. Here's what you're looking for - and if you're unsure, a meat thermometer can be super helpful with this!

Note: for the perfect texture of the ahi tuna, I really, really don't recommend anything higher than medium rare for this recipe. In fact, rare is my favorite way to eat it! And if you buy sushi grade tuna, it should be totally safe.

What to Serve with It

A big ol' salad with lots of fresh veggies would be a great side dish for sesame crusted ahi tuna. You could throw in some mixed greens, cherry tomatoes, cucumber, carrot, and whatever other veggies you like. Top it off with a simple vinaigrette dressing and you're good to go!

Grilled veggies would also be a tasty side for sesame crusted ahi tuna. You could slice up some zucchini, bell peppers, eggplant, and/or asparagus and throw them on the grill for a few minutes until they're tender and caramelized. Yum!

If you're feeling carb-y, some grilled bread or a simple pasta dish would be a great side for sesame crusted ahi tuna. You could brush some sliced baguette with olive oil and grill it for a few minutes until it's toasty, or toss some pasta with a simple tomato sauce or pesto.

Sushi rice: If you're feeling like sushi, you can serve the tuna over a bed of sushi rice and top it with your favorite sushi toppings.

And of course, no meal is complete without a refreshing drink to wash it all down! Some ice cold water, iced tea, or a crisp white wine would all be great options to serve with sesame crusted ahi tuna.

If you're looking for a white wine to go with your sesame crusted ahi tuna, you can't go wrong with a crisp, dry sauvignon blanc. The zesty acidity of the wine will help to balance out the richness of the tuna and the nutty flavor of the sesame crust.

A light, fruity pinot noir would also be a great choice to pair with sesame crusted ahi tuna. The wine's red fruit flavors and subtle tannins will complement the tuna's rich flavor and the sesame seeds' nuttiness.

If you're in the mood for a bubbly wine, a dry sparkling wine like Champagne or prosecco would be a great choice to pair with sesame crusted ahi tuna. The bubbles will help to cut through the richness of the tuna and the sesame seeds' crunchiness will pair well with the wine's effervescence.

Finally, if you're a fan of full-bodied white wines, a rich, buttery chardonnay would be a great option to pair with sesame crusted ahi tuna. The wine's oak and butter flavors will complement the tuna's richness and the sesame seeds' nuttiness. 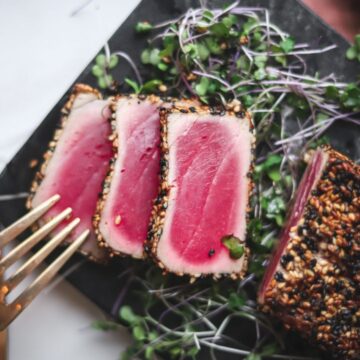 For the Dipping Sauce

You want your oil to be very hot - but not too hot. It's really easy for the sesame seeds to burn, so watch it carefully, and turn it down if you need to! If you're going for rare or medium-rare, it shouldn't be too big of a deal because your searing so quickly anyway. But if you're cooking for longer, you'll definitely want to turn the heat down so the sesame seeds don't burn!